Deschutes Pioneers' Gazette Bringing the History of Deschutes County, Oregon to you

A few years ago, The Oregonian newspaper carried an in-depth description of D-Day during World War II and what a young American airman from Bend did for his country over the beaches of Normandy on that momentous June 6, 1945. The paper’s photo of Lt. Jim Byers hurtled me back across the decades to 1947, the year that a full pads/tackle grade school football program started in Bend. I was a 60-pound halfback at St. Francis Grade School (now McMenamins Pub) and Jim Byers was the school’s first football coach int he new, four-team Bend grade school league. He was not only my first football coach, he was the strongest, toughest, most demanding person I had encountered ot that point in my young life…except for the nuns, who were in a league all by themselves. I was on the two fifth graders on our St. Francis grade school team, which was stacked with pretty rugged eighth graders. As a result, I didn’t play a down in an actual game that year. That didn’t cut any slack with Jim Byers. He put me and the other fifth grader through just as many paces as he did the eighth graders.

To a 10-year-old boy, Jim Byers loomed as a veritable beast of a man. As a high school senior running back, Jim was a human stump at 5-9 and 190 pounds…according to the 1940 game program when the Lava bears beat Medford, 20-7 for Bend’s first and only state football championship.

Today, with the kind of weight training programs and “nutritional supplements” available, Byers would probably played at around 220 pounds. As captain of his 1940 Bend high team and a prize recruit of the University of Washington, Jim Byers was truly a man among boys. But Pearl Harbor changed a lot of lives in December of 1941 and by 1943, Jim was in the Army Air Corps.

On D-Day morning, Lt. Jim Byers was pushing his 9-38 Lightning at 290 miles per hour, just 50 feet above the surf of Utah Beach… so low that salt spray was hitting his windshield. He was just 20 years old.

Jim had named his Lightning “Detour, Bend City Limits.” It and 22 other planes in his formation were heading toward an objective that was the key to the success–and survival–of the troops who would hit Utah Beach momentarily. Just six miles inland, the Germans has 24 mammoth railway guns which could be rolled out of concealed sites, fired at Utah Beach, and then rolled back into hiding.

At this point in the war, Jim had already defied the grim odds of flight combat…having flown 27 previous bombing missions into France, Germany, and Belgium. In late 1944, for example, he earned the prestigious Distinguished Flying Cross for an act of bravery described in official commendation:

“After completing a bombing mission over Germany, Lt. Byers displayed a high degree of initiative and leadership when, in searching for targets of opportunity, he vigorously led his formation of P-38s to attack twenty enemy aircraft which were attacking four friendly aircraft. Be his outstanding tactical technique, Lt. Byers cleverly outmaneuvered one of the enemy aircraft and destroyed it; while under his skillful leadership, his flight destroyed eight more aircraft, and damaged an additional four. Lt. Byers’s brilliant leadership and intrepidity were in large measure responsible in assisting friendly aircraft but also dealt a crippling blow to enemy air power.”

On D-Day, Jim’s Lightning, (the same kind of plan that Central Oregon native Rex Barber had used in downing the plane of Japanese admiral Yamamoto in the Pacific Theatre) was equipped with two 1,000 bombs, racks of rockets, plus .50 caliber machine guns and a 20-millimeter cannon.

A mile from the target, Byers’s formation was slammed with German .88 and .44 millimeter cannon fire. The flight leader and his wingman both went down in flames. Jim kept coming.

The 1,000 bombs–equipped with delay fuses–were designed to bounce on the ground, then into the target. Pilots like Byers usually never saw the bombs explode..they were already climbing to escape ground fire.

Jim roared in for the first bomb run, hit the release button, then pulled up and, under the direction of the new flight leader, circled around for the second run. Twenty-three U.S. planes went into the battle that morning, two were shot down and nine were badly damaged. But in just twenty minutes the American pilots knocked out 23 of the 24 German guns and saved the lives of hundreds of American infantrymen who were coming onto Utah Beach.

When “Detour, Bend City Limits,” returned to England, Jim handed it over to his brother Bill, who flew the second mission. After Bill’s successful mission, he turned the plan back over to Jim. After Jim’s second flight of the morning, Bill took “Detour” back over the English channel for a fourth attack on enemy positions.

The fifth mission called for 52 planes…three squadrons, to go after the Germans’ 21st Panzer Division which was only 10 miles from Utah Beach and heading towards the pinned-down U.S. ground troops. Jim flew “Detour” on the mission and Bill was his wingman in another plane.

The 52 P-38s roared in and with orders to shoot anything that moved, raked the German tanks and their support infantry with the 1,000-pound bombs, cannons, and machine guns. The 21st Panzer stopped, scattered, and then broke off their push towards the beach. The two Byers brothers and the rest of the attack forced headed back to England.

In all, Jim Byers flew 68 combat missions in Europe before returning to Bend. But his civilian life..and his coaching career at St. Francis.. didn’t last very long. He was soon called back into the Air Force for the Korean War, in which he flew an even 100 missions in P-51 mustangs. Jim was living in Portland when he died in 2000. Brother Bill died in 1978. 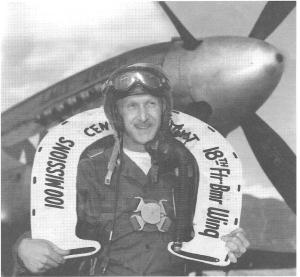 I visited Utah Beach a few years ago, and though long and hard about what the Byers boys had gone through that day… and survived. The cataclysmic collisions between supposedly immovable objects and irresistible forces left portions of the Normandy landscape about the beaches tortured and almost moonlike..even after 60+ years. Surely if hell ever existed on earth, Utah Beach on June 6, 1945 was as close as it got. My now-cloudy memory of Coach Byers has always been tempered by the realization of how deeply the random and ugly effects of mere fate can alter a person’s life. Perhaps the best running back ever to come out of bend High School never had a chance to play a full career at the University of Washing. Who knows what his life would have been like had he played a full four years and earned a degree? He certainly wasn’t the only athlete, college or professional, to have his life turned upside down by World War II. But at least he served honorable and courageously, lived through it, and came home to spend at least one brief fall coaching hero-worshiping grade school kids in his hometown.

Last September, in recognition of his service to his country in two wars and leading his Bend High football team to the school’s only football state championship, Jim was inducted posthumously into the Bend High School Hall of Fame.

Thanks for the memory,

Byers as a Senior